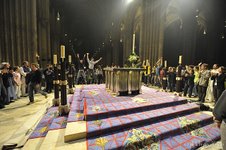 Youth celebrating after the Vigil

I have never been to celebration like this before. I’ve been to social gatherings with lots of laughter and commotion. I’ve enjoyed elegant multi-course, white-table clothed, dinners with sumptuous delicacies, as well as fun backyard barbecues with kids running all over the place having a great time. But there was something different about this night.

The joy was almost palpable. As soon as the three-hour vigil finished, just before midnight, the youth rushed to the front of the church to sing and dance. As the huge cathedral bells announced the arrival of Easter Sunday morning, near pandemonium broke out near the altar.

By one a.m. the Chartres cathedral finally closed its doors and the joyous singers took to the streets. I couldn’t fall asleep until at least two.

Actually, I didn’t want to go to sleep. I never wanted to lose the feeling. In fact, I’m still smiling several days later, picturing the scene and recalling the laughter, the delight, and the great feeling of hope we all felt that night.

In a flash I knew that all the money in the world could not buy what I was experiencing at the moment. The emotions ran high and love was overflowing. At the same, the feeling behind the celebration was very deep and the meaning substantial.

The one who died on the cross for our sins came back to life again! Unheard of. Unparalleled. Life-transforming for his band of scared disciples and followers. Radically re-orienting. Hope-inspiring. Joy-producing. Confidence-building. Energizing. Motivating. Absolutely explosive.

In the midst of the darkest of human realities, light has come into the world. No matter what difficulty we must face when we walk outside the doors of the church—and no matter what darkness we sometimes see when we look inside our own hearts and minds—there is more to the story.

God lifts up those who look to him for life. Fighting for what’s right is not a lost cause. Seeking to live by love is not a fool’s game. Struggling to be a person of integrity is not a waste of effort. Though we may be exploited by the opportunists, be disadvantaged by the unscrupulous, suffer unjustly at the hands of others, or simply stumble over our own weaknesses and failures, God does not abandon those who put their trust in him.

Jesus’ resurrection proves who is really in charge, and where true hope can be found. There is justice. There is forgiveness. There is reward for doing good. There is eternal life.

Though you have not seen [Jesus Christ], you love him; and even though you do not see him now, you believe in him and are filled with an inexpressible and glorious joy, for you are receiving the goal of your faith, the salvation of your souls. (1 Peter 1:8-9, NIV)

Filed under Prayer, Reflections from Chartres

This site uses Akismet to reduce spam. Learn how your comment data is processed.